Phineas Gage’s traumatic brain injury (1848) made him famous in the psychology and neuroscience fields. 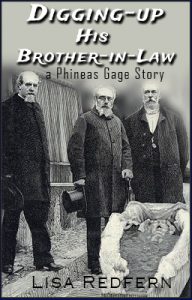 After his death (1860), Gage was buried in San Francisco’s Lone Mountain Cemetery.

In 1866, Dr. Harlow, who treated Phineas after his traumatic brain injury wrote to Mrs. Gage, Phineas’s mother, inquiring about his former patient.

One thing led to another and during the following year, David Shattuck, Mrs. Gage’s son-in-law, along with two physicians (past city mayors), dug Phineas up.

Note: The image above, left is not David Shattuck. Photographs/ daguerreotypes could be found of David or his wife Pheobe. In the interest of storytelling, public domain images are used as representations.

David Shattuck was the husband of Phoebe Gage, Phineas’s younger sister. | The following short story is an excerpt from the novella Phases of Gage: After the Accident Years.

On a misty morning in November, I found myself in the Lone Mountain Cemetery looking down at my brother-in-law’s tombstone. Doctor Coon and Doctor J.B.D. Stillman stood at my side, each with a shovel in hand.

Guards stood at the closed entrance gates affording us privacy.

Coats came off as digging commenced. At first, I felt that I was committing an unforgivable sin. But as my back strained and my hands developed blisters, those feelings subsided, until my shovel made contact with something solid.

The other two paused, nodding to one another, then resumed. Once space was clear, the two doctors were about to lift the coffin lid when I interrupted. “Wait! Gentlemen, please bear with my squeamishness. Before you open it, would you prepare me for what I am about to see?”

Doctor Coon looked uncomfortable. He glanced at Doctor Stillman who replied, “Why, David, you need not see anything.”

“No,” I disagreed firmly. “I promised my wife that I would follow it through to the end.”

“Very well,” the man sighed as he wiped his hands on his vest, “By now, all of the body fluids will have dissipated. The clothing will be intact. Likely, dry skin will still cover the skeletal remains. Hair will be present.” Coon paused to see how I was taking it. “Shall I describe what we’ll do next and the skull removal process?”

Squeezing my eyes shut, I nodded.

“Once the lid is off, the first thing I will do is hand you the iron bar. Next, I will test the skull to see if it separates from the spine. If not, Doctor Stillman has tools for that. I will remove any organic matter that freely separates. Doctor Stillman will take the skull and place it inside the box.” Coon paused, waiting for my response.

It took all three of us climbing inside the hole to pry the lid up and place it off to the side. I was surprised to see Phineas’s body exactly as Doctor Coon described.

Mummified-looking remains wore Phin’s clothes. But it no longer looked like the man I remembered. When I hopped out of the hole, Doctor Coon handed up the bar. It was ice-cold to the touch, heavier than I remembered.

Not wishing to watch more of the proceedings, I held it up, running a finger over the words etched on its surface.

This is the bar that was shot through the head of Mr. Phinehas P. Gage at Cavendish, Vermont, Sept. 14, 1848. He fully recovered from the injury & deposited this bar in the Museum of the Medical College of Harvard University. Phinehas P. Gage Lebanon Grafton Cy N-H Jan 6, 1850

I remembered Phin’s story about the engraver he hired to do the work, misspelling his name. I could hear Phineas saying, ‘When mistakes are made, it’s the good man who doesn’t get angry, but figures out how to move forward from there.’

I chose to focus on memories rather than listen to the doctors going on about their ghoulish activity.

“Mission accomplished,” Doctor Stillman proclaimed loudly, breaking into my thoughts. He and Doctor Coon replaced the coffin lid. “Let’s get that hole filled.”

When we finished, Doctor Stillman offered to take the skull with him to process it for travel.

I promised myself at that moment, that ‘the skull’ would remain inside its box until it was delivered to Doctor Harlow. I didn’t care to, ever, look at it, or have any member of my family see it.

Without my noticing, a murky fog had rolled in. The city beyond the cemetery walls had been engulfed in a chilly, dull, gray blankness of a November day. Seagulls could be heard high above in the blue sky that must be up there. Our boot steps sounded muffled.

Doctor Stillman cradled the box in front of him like a wise man on his way to deliver a gift to the baby Jesus. Doctor Coon carried shovels and a bag of tools. I kept pace with the others, Phineas’s bar grew heavier every minute.

A raven landed on a tombstone nearby. It shrieked, raising its wings like it expected a token in exchange for letting us pass.

When the guards opened the gates, the metal hinges let loose a high-pitched protest. I wondered if the flaming gates of hell would sound that way if this deed took me to that entrance.

Worse yet, would Phoebe ever forgive me for this?

Note: The dialog is fictionalized, but the people, dates, inscription, activities, and results are factual.

If you liked this story, you may also like Quaker Ladies Rubble, about the girl Phineas left behind.

Another interesting tale is San Francisco’s grave removals in the 1930s – 1940s. From the neck down, Phineas’s final resting place is in a mass grave about forty miles south of the city. 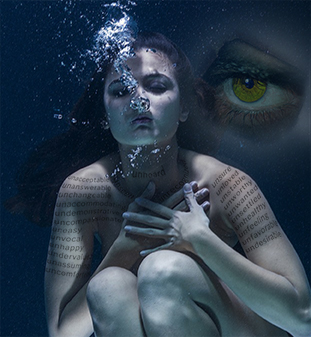 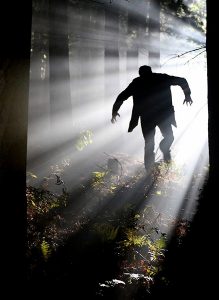